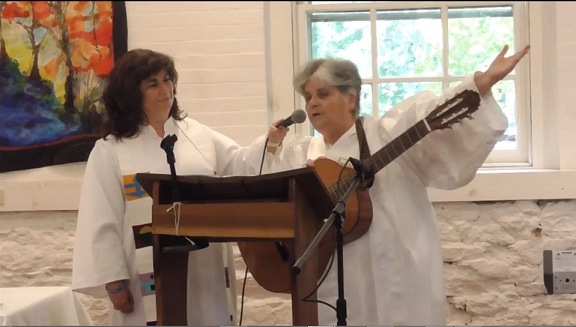 Silvia Antonia Brandon Pérez was born in La Habana, Cuba, and lived through the Cuban revolution.  She emigrated at the age of 11 in 1960.  Her family moved to the Dominican Republic and were evacuated during the civil war provoked by the U.S. invasion in support of the coup against democratically-elected President Juan Bosch.  Admitted to the University of Puerto Rico at 17, she participated in protests against the Vietnam War, racism and vivisection.  She is a student of ecumenical theology and mysticism, went twice to Standing Rock, and is now a Reiki Master and healer.  She is a homeless and immigration activist through her church, People without Barriers Justice Temple, and runs the Oscar Romero and Simone Weil Catholic Worker Home in Hayward, fighting mass imprisonment, deportation, human rights abuses and environmental depredation.  A mother and grandmother, retired attorney, and singer / songwriter, she was ordained a priest on April 8, 2017.