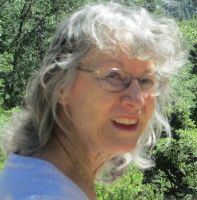 Nori Kieran-Meredith, M.Div. was ordained in 2005 to the Ecumenical Catholic Church and Metropolitan Community Church, for which she served as half-time pastor until 2010.  In 2011, she became a supply priest for Dignity USA, a ministry she has carried on ever since.   In 2014, she was ordained to the Association of Roman Catholic Women Priests and in 2015 incardinated in the International Ecumenical Catholic Church.

Nori’s early ecclesial career compromised decades spent as pianist/cantor/music director in Southern California parishes. At home with English and Spanish liturgy, Nori was associate pastor at Central City Lutheran Mission for a year and was chaplain at Loma Linda Veterans’ Hospital for several months.  Currently, Nori engages in a phone ministry with several ARCWP members, loves to write and to preach, and is editor of ARCWP’s newsletter, Leading.