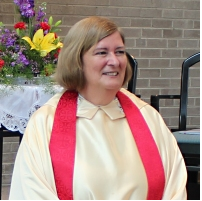 Debra Meyers has published several books as a professor of history, religion, and women’s studies at Northern Kentucky University. She studied at a Roman Catholic seminary and in 2013 completed a Masters of Religious Studies and a pastoral care certificate. Her ministry focuses on a growing inclusive Catholic community in Cincinnati and she serves single mothers and their children who make up the vast majority of impoverished people in the world today. Debra is a wife, mother, and grandmother. She was ordained a Roman Catholic priest on May 25, 2013 in Cincinnati.