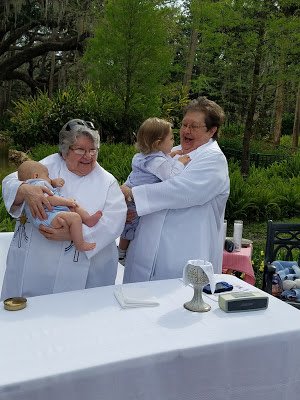 Two ARCWP Priests, Miriam Picconi and Wanda Russel baptized two babies at an April 2017 Easter Liturgy in Palm Coast, FL.  While women deacons and priests do not preside at sacramental rites in local parishes, the Catholic “nones” and “dones” call upon them to officiate at weddings, baptisms, funerals, and Masses where all are welcome to receive Eucharist. Roman Catholic Women Priests have been providing inclusive celebrations of sacraments for the “nones” and “dones”, and all who are ready for a new birthing of the Spirit since 2002!

Many Catholics long for a more expansive faith, focused on Original Blessing rather than Original Sin. They believe that religious teaching should promote a God of Love, rather than a God of fear. They ask how a loving God could require the death of Jesus as restitution for the Original Sin of Adam and Eve? It is time to drop a medieval theology that originated with St.  Augustine’s teachings in the fourth century.